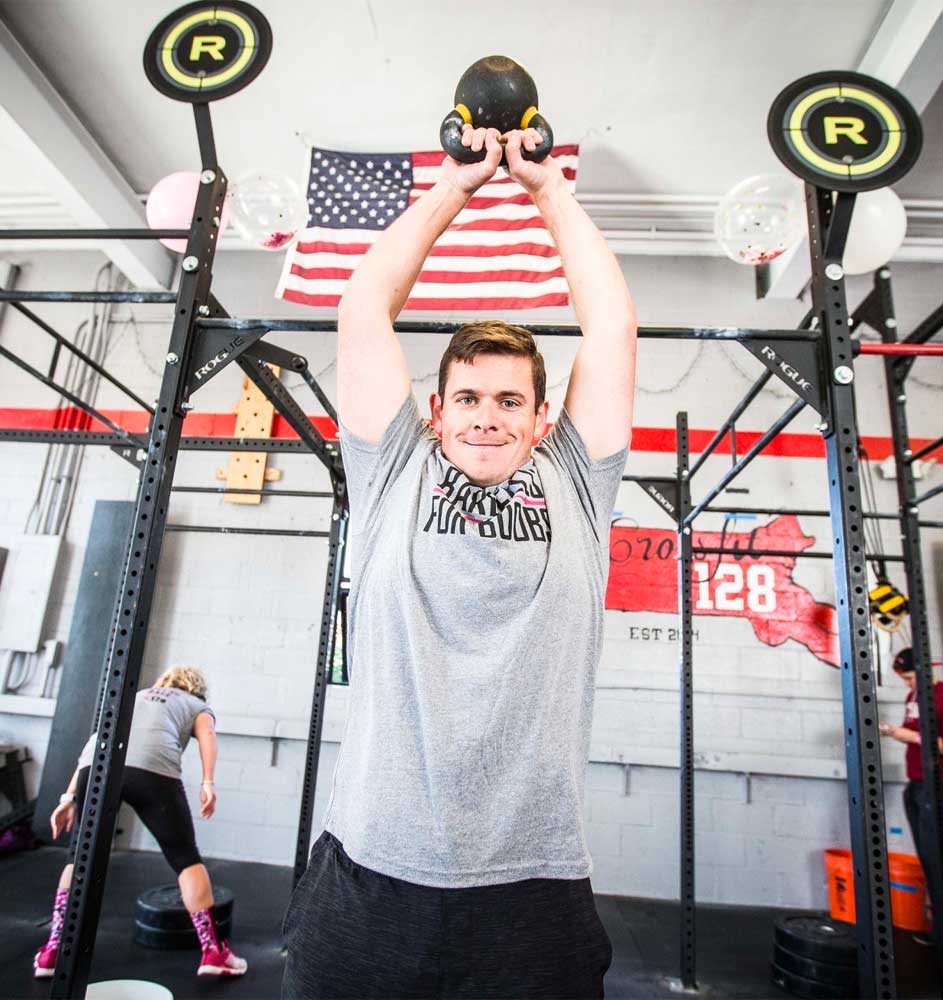 “When I was asked how I would feel about being Athlete of the Month I was quite frankly shocked and could not believe it. I wish I was told after the workout, because during I did not feel my effort was Athlete of the Month worthy. But it did motivate me to complete the WOD after the time cap. Later that day at work, I would receive a promotion which was great and all but NOT nearly as exciting as being named Athlete of the Month! My name and athlete have never really been used in the same sentence. I have given many sports a try but never really stood out in them.

I have been a member at CrossFit 128 for a little more than 9 months now and it truly has been one of the best decisions I have ever made. I contemplated this decision for about a year as my wife, Kendra tried convincing me to join. My prior workout history consisted of running, and trying to get into a typical workout routine but I would always fail. Despite my nerves, she finally got me to attend a Saturday introduction class, I still remember it as Kevin went over basic movements with me. After that, I was hooked and decided I would attend the 5am classes. Kendra told me the 5am class was intense, this caused even more anxiety but after a couple classes my nerves disappeared. I owe this all due to the other members, there was no judgement, each and everyone made me feel a part of the gym. Planet Fitness’s motto is “Judgement Free Zone”, but seriously CrossFit 128 should be associated with this instead. This place is its own community/family and it all starts with the coaches. It shows that each and every one of them enjoy what they do and want to help people become a better version of themselves. I didn’t realize how much of a family/community this place was until after a tragic event happened, CrossFit 128 lost a really awesome member/friend, Erik Neenan. I only knew Erik for a short amount of time but he was one of the 5amers that really made me feel apart of the gym. He truly will be missed but never forgotten.

Another great thing about being a member of CrossFit128 is I get to work out with my wife, we get to compete against each other but most importantly cheer each other on. Our two boys are allowed to attend classes/events and can see us cheering and being supportive of one another. This past 9 months I have competed in my first Open and other great events. I never would have thought I would be able to do an Open as I could not even do a box jump until like 2 months ago. All the support from Kendra and the other members has motivated and pushed me to work through my weakness instead of shying away from them. I truly could not have done this without all of you. This year I turn 35 and I have made it my goal to turn this dad bod around. Now my boys will not say, where is daddy when looking at the Athlete of the Month wall of fame. To steal a hashtag from Matt Fraser #HWPO.”